Just to let you know that the site has moved over to a self hosted site!

You can find us now at www.prettylittlepeculiar.com – you will need to edit any bookmarks you have saved.

This wordpress blog will stay up but will not be updated, so please pop over to the new site to get up to date posts from me 🙂

The response got me thinking.  A few people said I don’t look like a size 16.  This sparked the idea for my next post.  If you aren’t aware, I run a photography business with my husband and what I would like to do is a photo shoot with women of all different sizes called “This is what size … looks like” 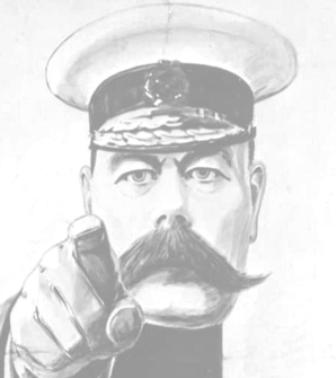 I need you ladies!  If you are interested in having a photo shoot with us and celebrating your loveliness on the blog, contact me with your size and a photograph.  I’d like to get one lady of each size so if you would like to be featured, email me at samcleasby@me.com and Ill get back to you as soon as possible.

We are based in Sheffield, so you will need to make your own way for the shoot.

I have no idea if this will work or not, but if it comes off I think will be an amazing experience and an inspiration to others, so please get in touch, share this post and spread the word.

I discovered something this week.  Im plus size, yup Im fat… No I haven’t suddenly gained a load of weight, I just realised that it is how other people see me.

I was a skinny kid, my grandfather used to call me a skeleton with a fringe.  I was a skinny teenager, I used to be a size 6 – 8, then at 19 I had my first child and went from a 6 to a 16, it hit me hard, along with a good dose of post natal depression.  But I threw myself into being a mum and put my weight out of my mind, after all I had a loving partner and a gorgeous baby son.  Two years later I had my daughter and two years after that I had my third child, our youngest son.  Each time I got pregnant I gained a little more and a little more.

Fast forward 7 years and I have never got back to my pre child weight, sometimes this bothers me, sometimes it doesn’t.  I have tried every diet going and can lose the weight but then it all creeps back on and to be honest I love food too much to be on a diet for the rest of my life.  Im currently a size 16/18 with a BMI that tells me Im overweight (no shit, Sherlock!)

Whatever weight I am and whether it’s annoying me or not I have always had the love and support of the husband, he says that men like women, and if a woman is willing to let them touch their boobs, they don’t care what size or shape they are!  He always tells me that he fancies me and that he couldn’t care less what size I am (though after watching those half ton human programmes, he did say he would draw the line at removing the side of our house to get me out…) 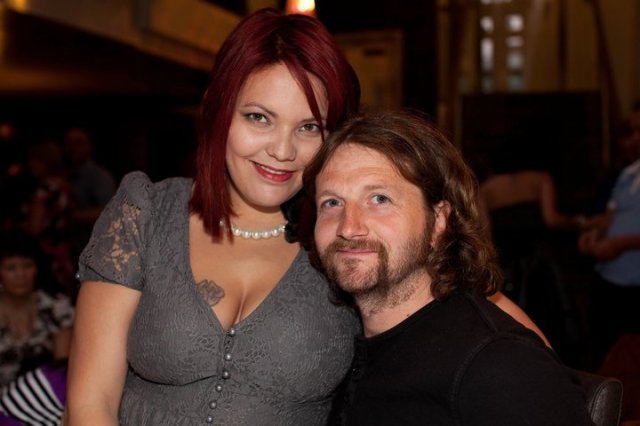 Anyway throughout my long and varied diet history, I have always had this kind of backwards anorexia thing going on.  When I look in the mirror, I don’t see a fat bird, I see me.  I probably see myself smaller than I actually am.  I was raised by my mum with two older sisters and we are all confident and sassy women – we don’t take shit from anyone and we aren’t afraid to say that we are strong and beautiful women.  Im sorry if this sounds big headed because it really isn’t meant to but I wasn’t raised to be a shy wallflower, I was raised to be proud of what Ive got!  I used to say “I may be fat, but Im fucking pretty!”

So this week I saw on Facebook some male friends talking about an x-factor contestant, specifically about her weight.  It was fairly nasty but juvenile and silly comments.  I commented “you horrid boys!” and received immediate apologetic replies from them all.  And then it hit me.

Wow.  I suddenly realised how others saw me.  Im a fat woman.  A plus size woman.

There is nothing at all wrong with that but I had never seen myself as that before, silly as that may sound as I have been a similar weight for years!  I know I am overweight, and I always make the fat joke before anyone else can.  But in that split second I saw myself as other people see me.

Now as I said Im no wallflower and I replied that they were only apologising because “you know this fat girl could kick your arses. All of you at the same time. I’m like the hulk. I throw you motherfuckers all over the place…”  And actually I think they were apologising because Im a friend and they didn’t want to hurt my feelings, but a fat friend. 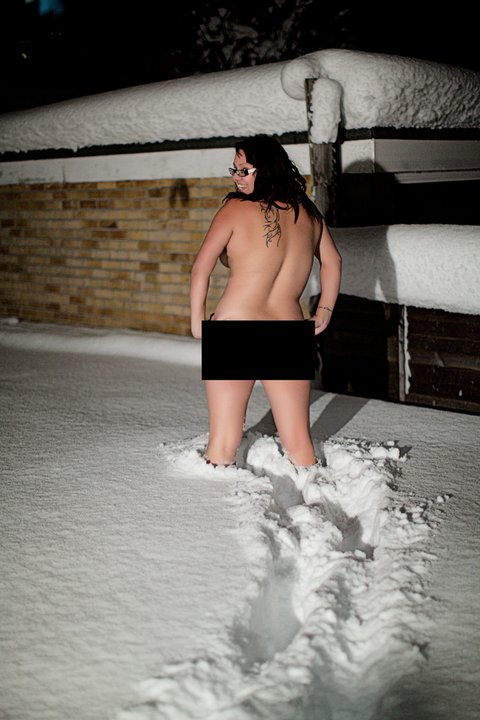 It actually feels quite liberating you know, I realise that however people see me doesn’t change who I am.  I would like to shift a few pounds but only because I want to be fit, I don’t want to end up with weight related illnesses.  But I have wasted 7 years dieting and Im not going to spend the next 7 years dieting too… I like me, I like how I look (most of the time! Timm you are not allowed to use this post against me next time I have tried on everything I own before were going out!!!) so HOORAY for the fat girls… because we make the rockin’ world go round.

So boys, listen up.  We have tits and hips and curvy, wobbly bits, true.  But don’t try and make us ashamed or sad.  Celebrate that we are all different and know that women are awesome whatever size we are…

Some of the coolest watches around… 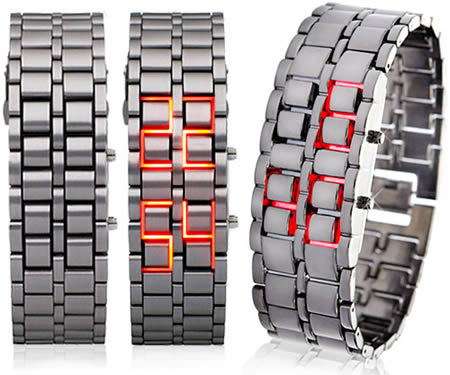 The Iron Samurai watch is made from “Samurai sword carbonized steel folded 1000x over,”  The watch hides red LEDs inside the pattern of the bracelet, totally geeky but quite cool.

Its product description is pretty amazing though.  “The Iron Samurai has been known to increase its wearers’ strength, dexterity, constitution, intelligence, wisdom, and charisma by as much as 20 points each.” 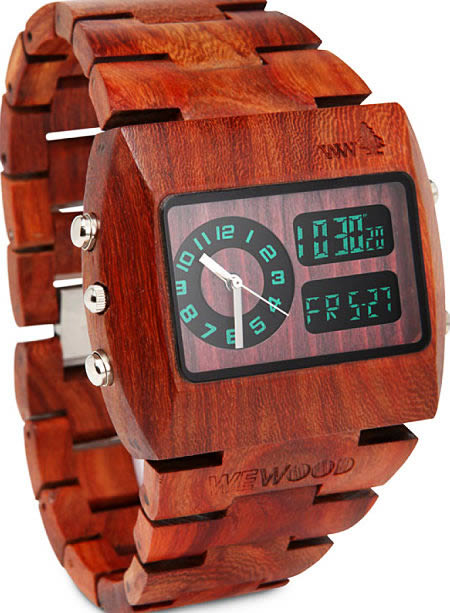 The WeWood watch is just beautiful, it is made of 100% natural wood, saved from scraps from the flooring industry that would otherwise be destroyed. The watch features a wood case, bracelet, and dial.  Press a button and the time and date light up the face. Best of all, WeWood plants a tree for each watch purchased.

This Space Invaders Watch is so cool, but at $10,000 it would need to have genuine aliens in it.  Created by Romain Jerome with a limited edition of only 78, these rare watches are only for the very richest of geeks.

The Relativity Watch from Think Geek rotates like a galaxy, you see the hands of this watch tell the time, but the face doesn’t. The numbers are melty, much like your concept of time. In 30 seconds, the 3 becomes a 9, or the 11 becomes a 5.

The TokyoFlash Shinshoku watch has a solid, continuous stainless steel band and features a matrix of punched out holes with twenty-nine super bright LEDs beneath the surface which illuminate to present the time.  Twelve red LEDs indicate the hour, three green LEDs indicate 15, 30 and 45 minutes past the hour and fourteen yellow LEDs indicate single minutes. 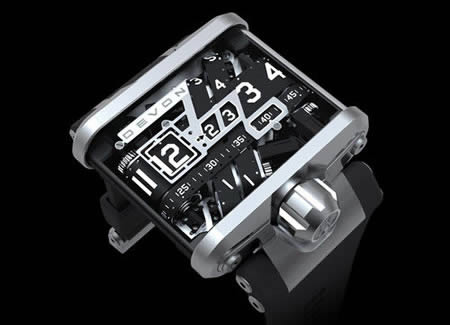 The Tread Watch is uber cool. It uses a treadmill-like system with belts that are woven together and have separate motors. The time is highlighted as the numbers feature inside a cut out shape while they’re rotating on the mini treadmill. The watch is made from bulletproof polycarbonate which means it’d be perfect if you were a spy or someone who gets shot at a lot.  Priced at $15,000, you’d probably need to be a spy to afford it.

I do love zombies, but you have to love them an awful lot to have a Zombie Wedding cake…

These are some of the most awesome undead cakes around.  I have to say, Im pretty tempted! 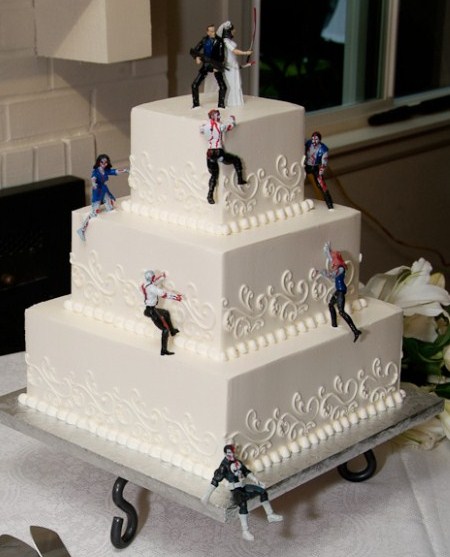 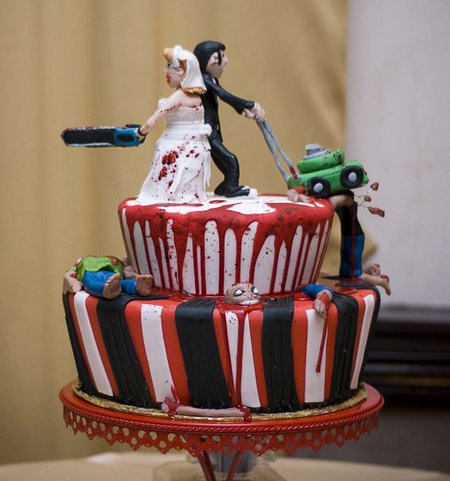 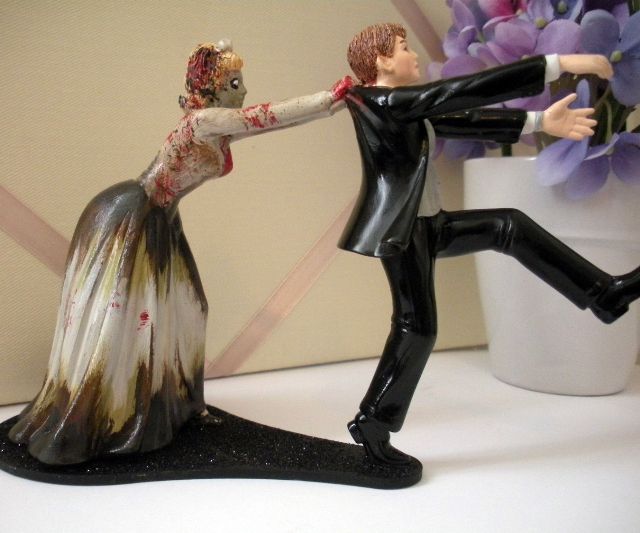 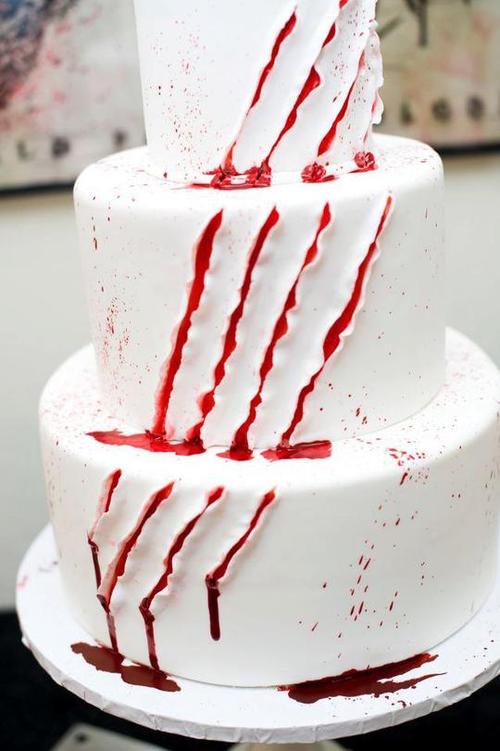 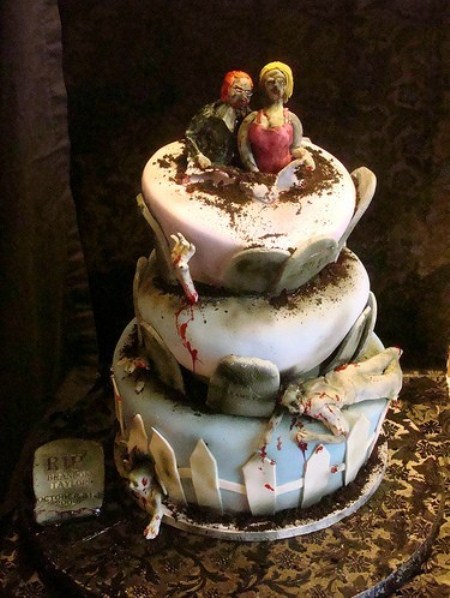 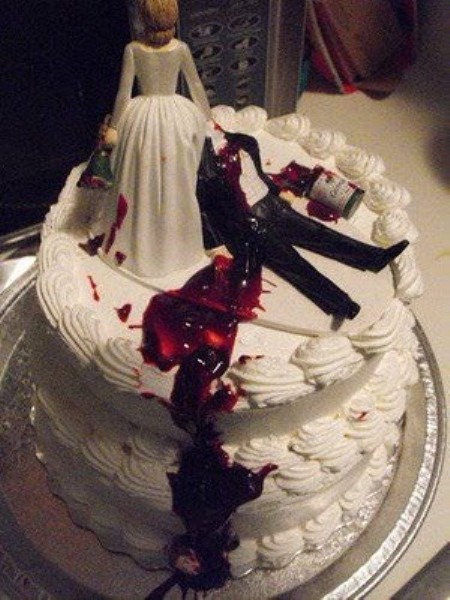 Add blog to our blog directory.

Error: Twitter did not respond. Please wait a few minutes and refresh this page.